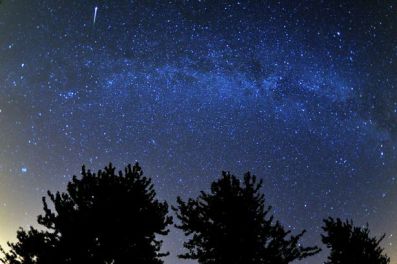 Every morning is the same; wake up before the sun, skip breakfast, race the rays of sunlight down from the highest point in Sydney to the lowest lane for the bus stop. Board the bus, watch the people, watch the window, see past the glass to the wonderful world. Repress the thought that there’s yet another English assessment task that is worth no marks begging to be done. One hour later arrive at the train station. Hop on a train, take another hour, and arrive at school. Rinse and repeat!

Today was different. There were no new faces on the bus, the sky was grey but without any rain to keep things interesting, and there was a thick fog obfuscating what would have been a glorious view outside. I found myself longing for a new face to pick to pieces, but not just any face; I had a very particular sort of person in mind. Someone who radiates magic; a person who overwhelms both man and woman with infinite beauty; the one who can redefine osmosis with a meaning that is more fitting of a word that sounds so good.

This train of thought was interrupted by a loud expletive from the driver as the bus suddenly came screeching to a halt. It was as if someone had hailed the bus right as it would run them over in order to save their own life. The doors opened, and I could see nothing through the fog seeping into the bus between the cold metal doors. Excitement filled my mind as I wondered who it could be. As the silhouette of this newcomer drew closer towards my seat, my electrified anticipation flew higher than I thought possible in this temperature. Out of the fog, appeared none other than that amazing person that had occupied my minds eye ten seconds before; the most beautiful, the most wonderful, the most graceful, glorious and gentle person on this planet; The absolute zenith of humanity; An angel trapped in mortal clothing; The light that can start and end all wars; The greatest of gods people; a sublimated form of god himself! The very reason life exists at all; the meaning of life!

Out of the fog stepped none other than a Redhead.

The doors closed and the bus lurched as it prepared to attack the steep hill with its’ wheels once again. The sudden jerk caused the beautiful angel before me to stumble slightly, and yet even in this imperfection was there embodied a sort of cosmic correctness that brushed aside any thought of corruption. Her beautiful eyes swept the seats, searching for a place to sit herself. There were hundreds, thousands of seats she could have picked, and yet by some strange stroke of fate she chose the seat, opposite and facing, me. Blood rushed through my whole body as I blushed a blush that could not be blushed for anyone else; a blush that set my whole face red, extended itself to my neck, and didn’t stop there. Soon my arms and fingertips had turned a bright bright red and begun to melt the ice which was coating the window on which they lay. My toes began to burn and steam quite visibly began to rise from my feet. The blush continued consuming my body, and finding that it could do no more there, begun to seep out onto the floor of the bus; creeping up to the other passengers and setting them in a hot flush as well. Suddenly my whole body burst into flames, the bus flew off the edge of a cliff, the other passengers on the bus melted into a void, and right as a mushroom cloud was beginning to appear on the hyperbolic horizon; the redheaded Goddess sat down.
The other passengers were still sleeping, despite the bus blowing its’ horn at some slow cyclists who were getting in the way more than the fog, and despite the presence in the bus of the very reason they walk in this world. I frowned at them all; stereotyping themselves and the whole world with no shame. It is a sad thing indeed when the entrance of a redhead is not met with immediate awe, respect and praise. But unfortunately, this is how the world stands. The world rejects their true kings and queens, labelling them gingers. Outcasts. Outsiders… How horrible, that the most godlike, angelic figures in all time and space must meet with such mad manners. Even now; in shops all around the globe, Dominant pants are being chosen over red denim, those most recessive of jeans. The red gene is reason for respect not racism! But no, society would call it a curse to be blessed with such beauty. They give the gift many names; Gingeritis; “You Fucking Ranga”; The curse of the outsider. How could this picture of pure beauty before me be treated so? What could this visual elegy of elegance have done wrong to deserve it? How could she do wrong at all! What a piece of work is a Redhead; how noble in reason, how infinite in faculty; in form and moving, how express and admirable; in action how like an angel; in apprehension… How like a God! 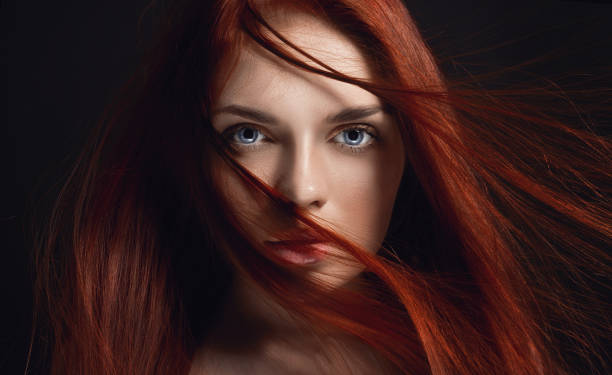 The only thing “Outsider” about the praeclarus girl facing me was that she had been outside too long, in the cold cold icy cold air, and was shivering. Shivering and shaking. Shaking her hair; Her long, silky smooth, burning hair running down past her neck and wrapping her body in a waterfall of warmth, casting off the shivering shell and kicking it to the side so that she could sit still, safe, and content; wrapped in the warmth of her own magic. I could not draw my eyes away from her, no, and neither could I restrain my ears! She sighed a sigh that sent shivers down my spine with such intensity that I could hear it cracking under the stress, the sound almost interrupting this ethereal music washing over my senses. It was as if she could simply pluck music out of the air without aid of pipe or wind, and with a mere breath set the elements to movements of chromatic harmony. Oh her breathing! The perfect, regular, waves of warmth carried with them a tale of a body that knows no sickness and is immune to all injury. So overwhelmingly powerful was her influence on my sense of sound that even my nose and tongue could detect her perfection in the air. My olfactory system exploded with sensation; she was the thirteenth essence! You would have to distil all the roses in the world to even come close to imitating how wonderfully this was received in my nose. Her scent was more precious than the most expensive perfume; with it came memories of all the most wonderful, happy, exciting, sad, victorious and unfortunate events in my life. All these moments came back to me and played out again, as if I were looking into the past, looking into the very crux of my identity, peering through a window to my immortal soul. I was reminded of what it meant to be human. The images dissolved into fireworks and stars, and glittering, shimmering, glowing red hair as my eyes opened and returned to the present. Reflected in her eyes was absolute infinity, those beautiful blue orbs; the two blue planets beneath the red curtain that align on the truth – but I could have sworn they were green not two seconds ago, and now they are a grand Hazel! Magical eyes of innocence, infinity, intelligence… and ignorance; From the eyes of everything, I wanted nothing. I only needed a single image, and it was sitting before me already.

I sat there, under the full effect of this redheads magic; this angels enchantment; this outsiders curse. My freedom lost to beauty. Fair tresses man’s imperial race ensnare, and beauty draws us with a single red hair. 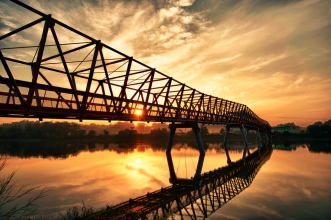 The bus stopped again. My redhead rose, and with hair shining brighter than a thousand stars, did exit and return to the outside world, the fog parting before her and joining behind her with every step. The three word poem “Bright. Beautiful. Deadly.” repeated over and over in my head. As she moved further away the spell she had cast over me grew weaker and weaker until finally… I woke up. Suddenly I felt cold again. The bus was still covered in frost, the passengers were still sleeping, there was still no light. I yawned and peered outside the window, my eyes winking away tiredness. I searched for the redhead, hoping that I could fill myself with warmth for a second longer. I searched and searched; stretching my sight to the heavens, but I couldn’t find her. Over the water I could see the sun rising, a semicircle of orange beauty. Bright, Beautiful, Deadly indeed. Some of the other passengers opened half an eyelid and briefly joined me in lending their gaze to the horizon. The soul of our solar system sparkled bright, but not so bright that it would force a wince of pain and my turning away; Dawn is the hour to appreciate our majestic sun. I heard a snore behind me and turned around. Everyone had returned to sleep but me. I sighed and for the final time glanced out the window at nature’s light show, smiling as I noticed a familiar face on the horizon.